A weekend to remember

As those who know me, this weekend gone is a MOTOGP weekend, so for me to leave a weekend of couch potato and watching motorcycles is rare. But with the weather promising to get worse, I made the decision to watch the MOTOGP later and head out. 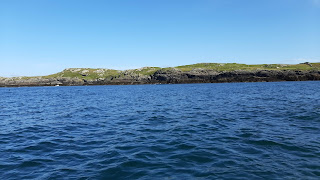 The week had been good and I had visited Bilbo several times to do the odd few jobs, get water and generally just drink coffee and enjoy the peace and quiet of the Little Killary. It is an amazing mooring, that my cousin lent me for the summer. You can see out into the bay, but is blocked from the westerlys.

So Saturday, as usual, checks done on the tides and weather. Weather was promising to be good with light winds and high temperatures. So food was made the night before, early to bed and up at the crack of dawn to walk and feed the dogs and head off. 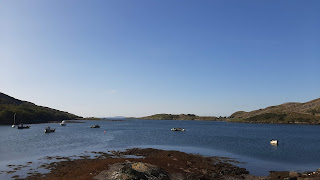 It takes me about an hour to get Bilbo ready. I don't rush. Outboard is filled with petrol and kettle boiled, main sail stuck up but not powered. I use SailTRX so my ground contacts know my route and if I am late, contact the Coast Guard. I also have AIS and a Delorme (now Garmin) inReach which also acts as a tracker and technically an EPIRB.

I headed out on the outboard, and as soon as I cleared the point, out with the head sail and powered the main, and a day of sailing. Bilbo does well in most winds, except running with the wind. Maybe she needs a lighter sail up front, Close Haul or broad reach, she is happy.

The plan was to head towards Renvyle, cut in in front of Cramp Island and then up slightly towards InishTurk, then head back. All was going well until I turned back towards the mooring and the winds dropped to almost nothing. This was not the plan, so motored back, a long stretch.

Tied Bilbo back up for the evening and cleaned the cabin. I still have not made the base for the v berth up front so that is a job for the winter. Coffee and watched the tide slowly climb. The problem with where the tender is stored, is there is a lip of rocks. If the tide is almost out, then it is a hard job to get tender back in. 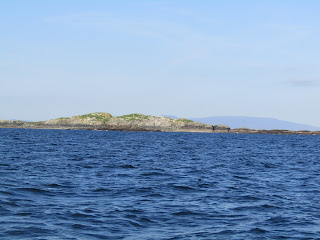 So Sunday. The weather was almost the same, very hot, clear skies, but a little more wind. In fact it was gusting quite strong as I prepared Bilbo that I ended up reefing the main twice. That means I had the smallest sail area possible. And with the winds coming, unusually, from the east, I was able to sail off the mooring , I did have the outboard running just in case.

The plan was to head to InishTurk, have a coffee and food, then turn back. However the winds were to decide that that was not going to happen. They died away and I was sat for an hour slowly moving at about 1-2 knots. So kettle on and food was eaten. I cannot say how beautiful the scenery was. The whole bay glistened. And Bilbo bobbed on the waves. Life is good when you are away from the hustle of life. 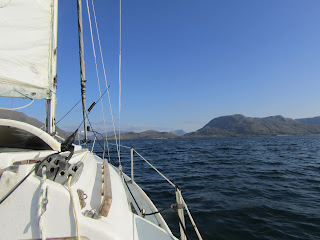 So expecting to have to motor back and less than 2 nautical miles from InishTurk, I turned and headed back. At this the wind freshened and was hit with a steady wind of 10 knots gusting to 15 - 18 knots. Bilbo was a very close reach and sped off like a scalded cat. I tacked my way back until I was about an hour from the mooring, at which point, I knew the evening was setting in, so the outboard was fired up and in we went.

An hour listening to the outboard and watching the beautiful Connemara landscape and in the Little Killary we were. Tied up, main was flaked and covered, coffee and generally tidied up. Looks like this maybe the last sail, but we will see. 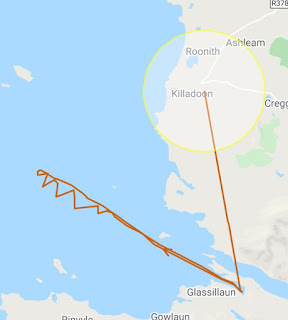 I sit back and wonder where the last year has gone. With Covid, I did more work on Bilbo than I had initially planned, and sadly less sailing than I had hoped for.

To help support me and my little boat, please try and click on an advert.

I have been planning the trip on Navionics and checking my decisions against charts and other online sources.
This is not a definitive list. I may decide to sail for a couple of days and then stop somewhere else than planned. Or the wind maybe totally against me so I end up staying in one location for an extra day.
The rest days are not listed simply as I will sail when I feel fit and rest when I know when I need to. It was the same when I crossed Russia in 2015, I stopped in Omsk and Krasnoyarsk for rest days even though I had not planned for them.
If anyone has a suggestion for a stop along the route or sees something wrong, please leave a comment. I plan to either tow my tender or bring an inflatable dinghy.
The route is as follows:
This is a total of 906 Nautical Miles or 1677 KM
This is not a definitive route. I am still checking guides and online sources and charts.
The exact time to do the route will depend on weather, wind and tides, all well if I feel tired or not.
This is being done to help raise fund for the brave crew of RNLI Clifden. They are an amazing bunch and deserve all the help we can give them. Of course, this applies to all RNLI crews.
The Facebook event page 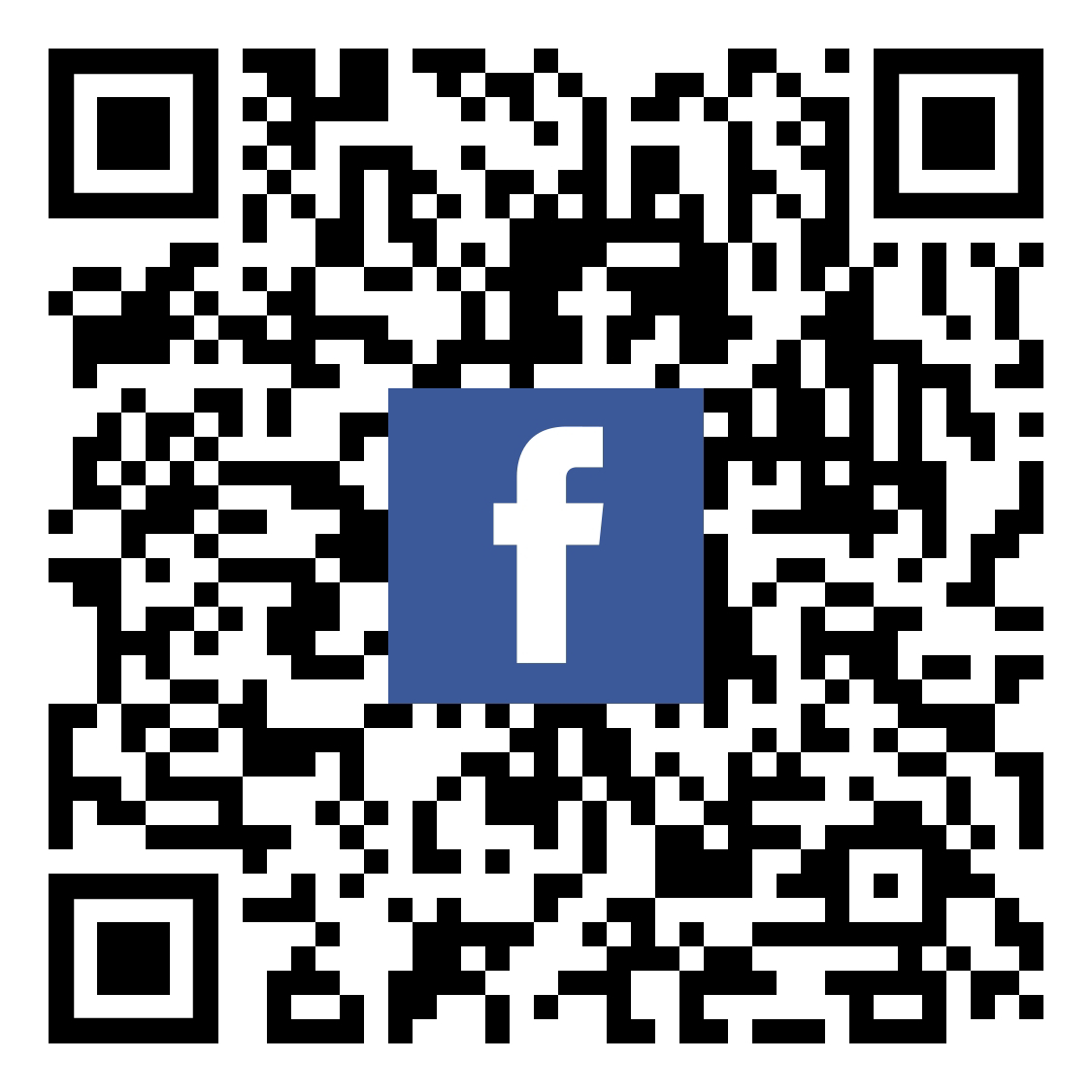 The weather was looking good for Sunday, so I decided to head out and do a bit of fishing as I heard there were mackeral running in the Killary. 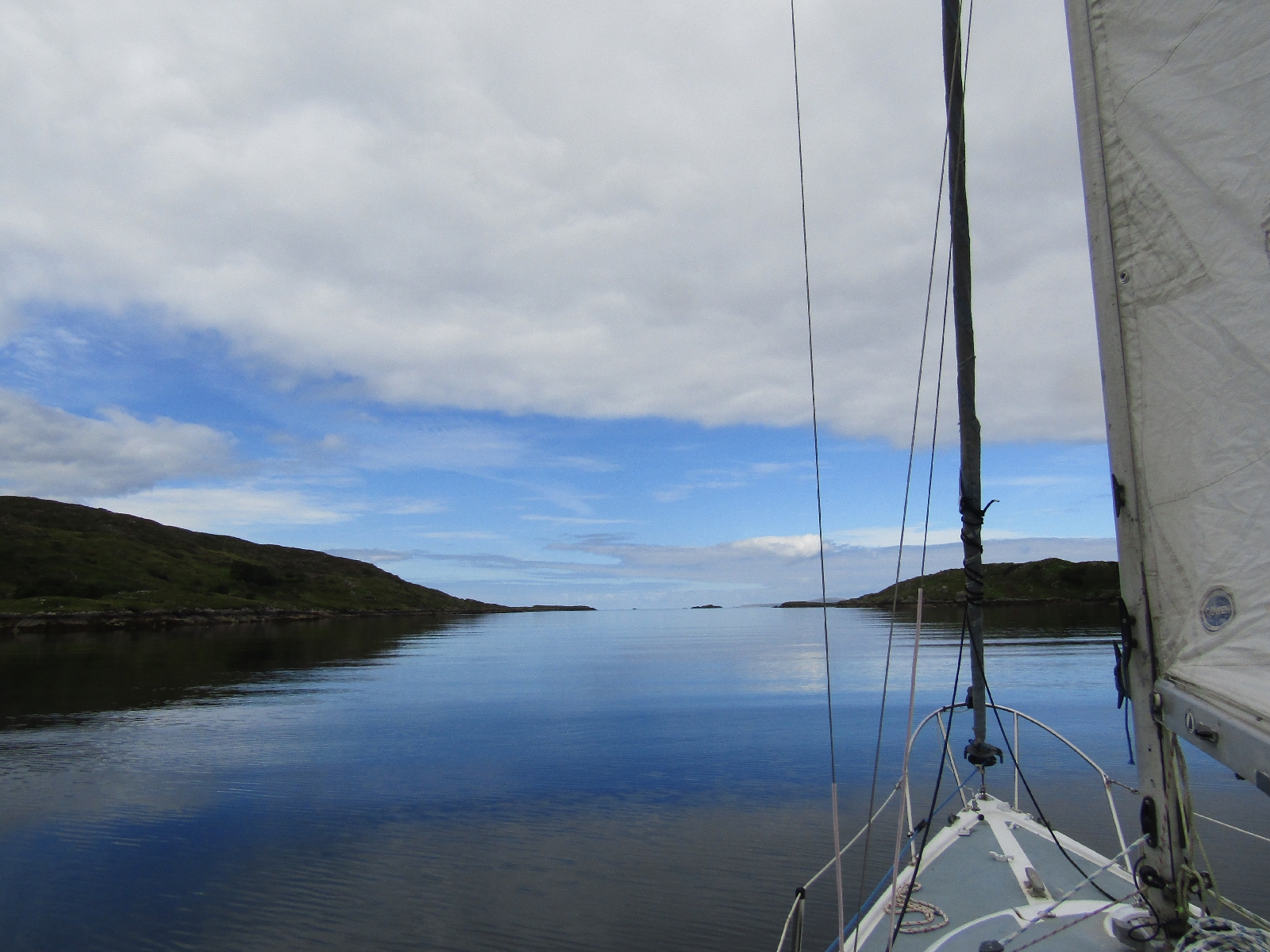 The day was a little. Overcast, light winds but the clouds cleared up and we were off.
It takes me a while to get a Bilbo ready. I have a 33 step list that my good friend and sailing instructor, Hugh Poore gave me. I regliously go through this and then I set off.
Getting out of Little Killary is an outboard job, unless the wind is coming from the east, there is no way to sail out. I didn't care, I had a full outboard and a tank of petrol spare.
What I hadn't realised was that my gas for the cooker was almost out. Coffee was quarantined for the day and no chance to cook any mackeral.
I fished for a while but got bored. So I looked at the charts. I have been to Cramp Island once before, see my other blog for an upcoming tale about that.
So off I head to InishTurk. So far InishTurk has eluded me due to light winds or winds on the nose. I don't want to use the outboard unless necessary. 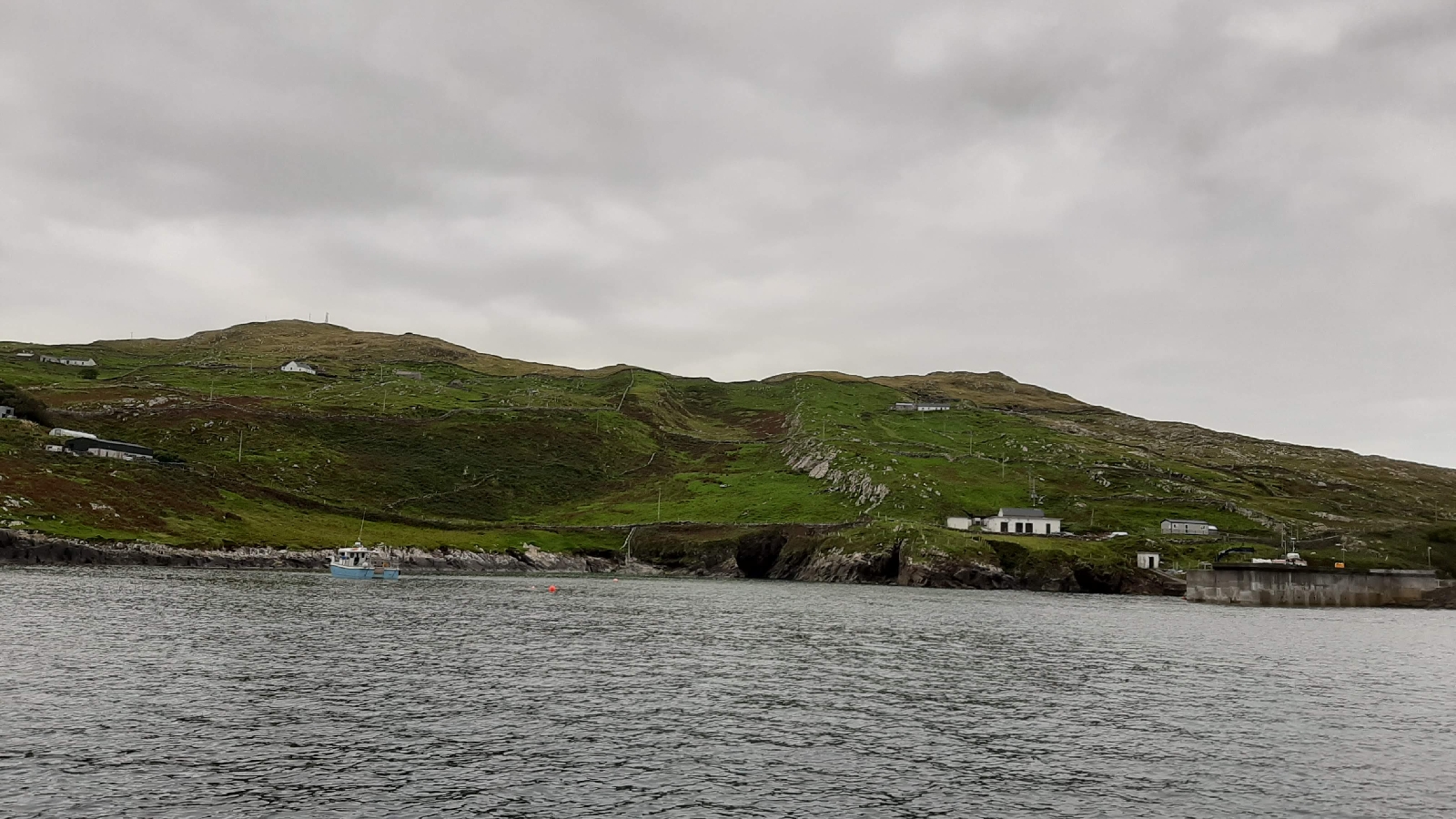 But the wind veered slightly and off I went on a close reach with the wind averaging 7 knots with the odd gust into double figures.
One thing about Bilbo, is she flies. Once she gets a wind up in her sails, she takes off like a scalded cat. It doesn't take much extra to get her going.
So after a pleasant sail, I finally landed at Inishturk. They request that visiting sailors leave the Dock to the ferries and islanders as it is very small. There is a pleasant mooring just outside the pier and was good practice for sailing up to a mooring. Sadly I judged my boat hook position wrong and bent it slightly on the pullpit.
Last of the gas was used to make a coffee and a local rib owner was passing and stopped. Very nice bloke. And very informative about the island. Definitely bringing the inflatable the next time I sail over.
As it was late in the day, after 5pm, I headed off, motoring to get out of the Lee of the island. Then out with the head sail to discover that the winds had veered to the south west so I was on another close reach.
Dropped the lures out and ended up with 5 decent mackeral for the sail back. And a small pod of dolphins chasing them away.
I enjoy watching the dolphins and sadly didn't get any decent photos of them. Especially as they jumped out of the sea.
It took the best part of 3 hours to sail back, and the winds died about 2 mm from the mooring. No problem, outboard in and this time, again, had the mooring first try. I am remembering all the tricks that Hugh taught me. I do enjoy sailing to the mooring and picking it up without using the outboard. 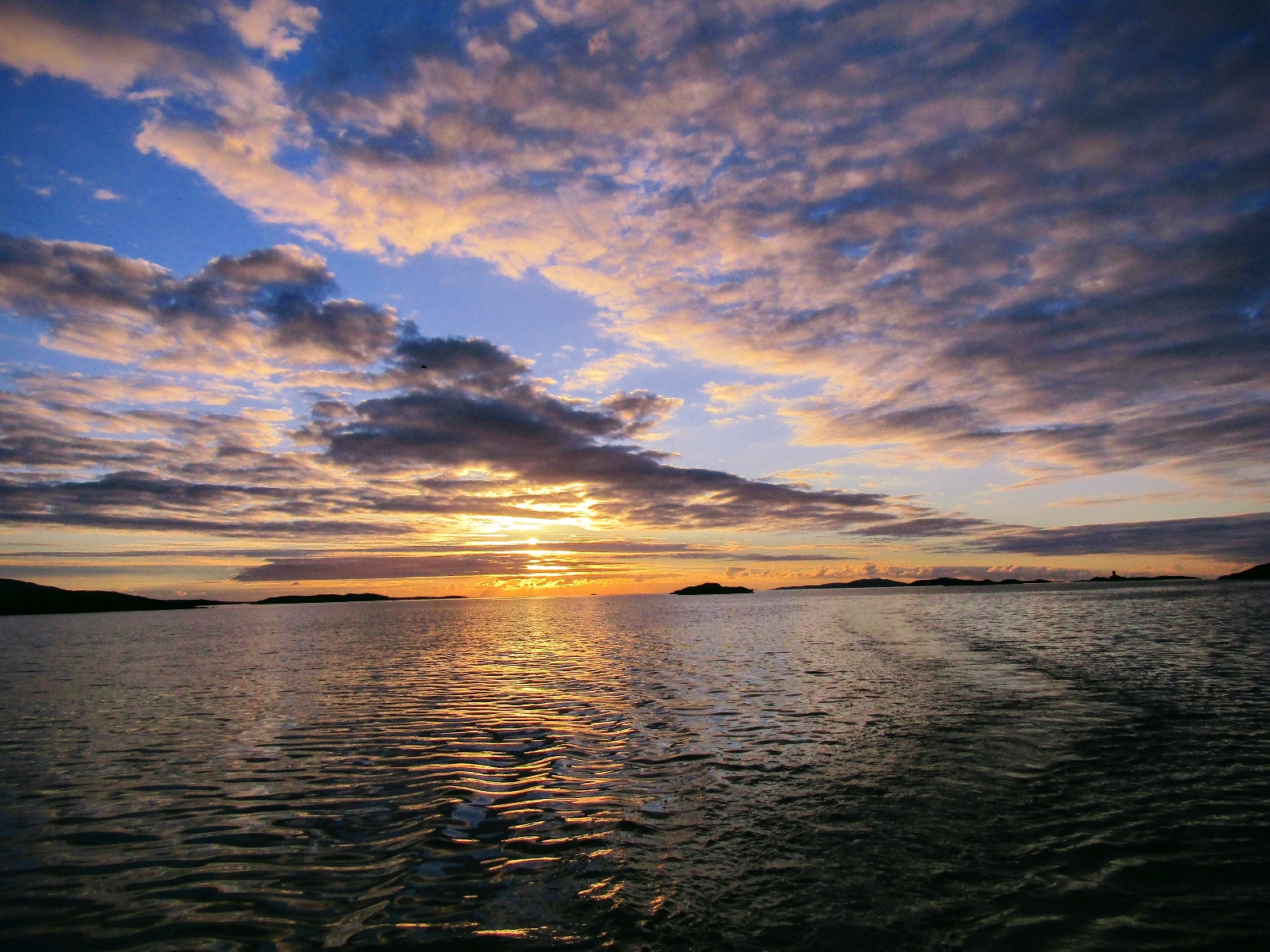 Quick cleanup and bagged the mackeral and with the dieing light rowed back and the day was done.
All in all, about 21 nautical miles to my log for my next course and also good training for my circumnavigation of Ireland next year for the Clifden RNLI
at September 01, 2020 No comments:

To Jester or not

Every 4 years a single handed small boat event from England to Newport USA or around the Azores takes place. In line with this, is a shorter... 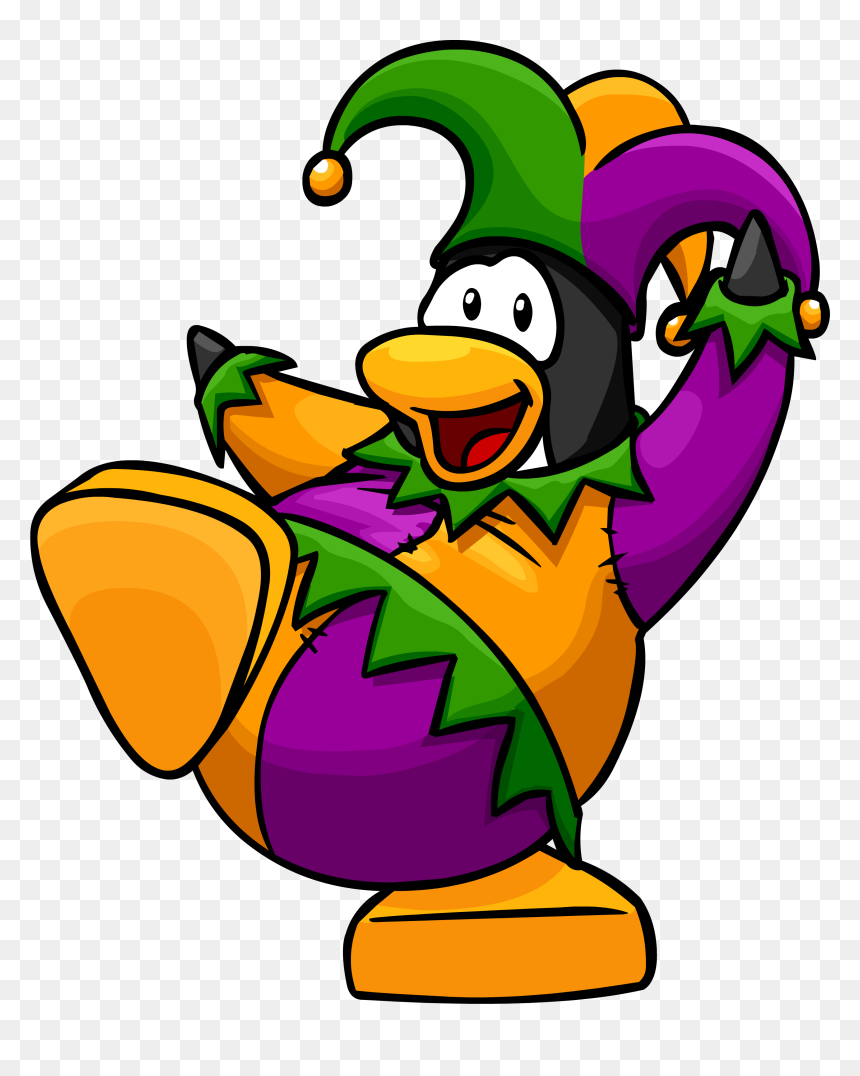 Bilbo is a 1970s Pandora International built by the now defunct Rydgeway Marine UK yard and designed by E. G. Van de Stadt. With a ballast of 445kg, these are light go fast yachts and will grab the wind and run and and still used as racing yacht even with their age

TheCivvie
I have lived a life that can only be explained as extraordinarily ordinary. I have had my share of misadventures and set backs. But I try to keep going but well sometimes it is hard. It has been said that if I wrote my story, no one would believe it. But I would not change anything